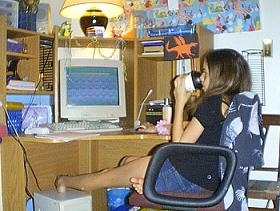 One thousand British teenagers were polled by privacy software firm Cyber Sentinel on their weekly web browsing habits and dissected data into some questionable statistics.

Most computer time is split between the kid's bedroom, a family living room or a separate study room.

One in four teenagers readily admitted to talking to strangers online and felt it was alright, while a third also admitted to hiding some of their web visits from their parents (one can probably guess which pages).

Ellie Puddle, Marketing Director of CyberSentinel, said, "The alarming thing about this research is that it shows that teenagers are obviously exploring all sorts of topics as a result of modern-day pressures. For instance, pressure to emulate celebrity standards of beauty is resulting in teens spending a significant amount of time researching cosmetic surgery. And for some reason they find it easier to go online to conduct their research than asking mum and dad for advice."

As much as I'd like to comment on the cure to some of these ailments, such as the excessive time spent on dieting and plastic surgery sites that could be substituted with fewer hours online, it's hard for a web writer to be critical of his fellow office chair brethren. Perhaps I'm outside their age demographic, but I don't remember ever spending an hour and a half of my week reading about puberty or pregnancy. In that case, the best advice I may offer is to upgrade your web browser to one with tabs to balance the obviously heavy load of information the internet has to offer. An efficient browser is a healthy one.