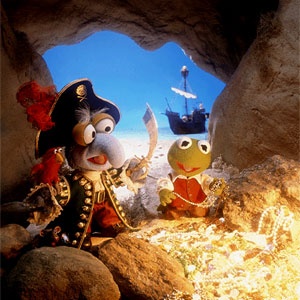 The way it works is Treasure World will use the DS' built-in Wi-Fi to sniff out local Wi-Fi hot spots and whenever it finds one it'll generate a unique in-game treasure. Kids can then use their unique collection of goodies to customize their game world or characters, trade with players and show off how cool they are in-game. According to Aspyr, Treasure World will sport thousands of different unlockables.

"With Treasure World we are creating a new way for you to interact not only with the world around you, but with friends and family and even other players around the globe," Ted Staloch, vice president of Aspyr Media, said. "We believe that Nintendo DS owners, particularly our core demographic of young gamers, will really latch on to the thrill of discovering hidden treasures wherever they go, playing with their own unique in-game world and sharing the experience with those close to them or through our robust online community."

It's an interesting idea for sure, but there are a couple of problems here. I'm aware that this is a kid's game and none of this should really matter, but bear with me. First, what if you live in the Ozarks or something and you have barely any Wi-Fi around you? You'll be on the game's online social network and you'll see other kids with their huge collections of Wi-Fi treasures to trade and you don't have jack squat. This is the kind of thing that destroys childhoods here. And, conversely, what's to stop people who live in cities to say, drive downtown to the business district where every block has about 100 wi-fi networks active at any given time and just scoop up every single sweet item they unlock? Something like that could destroy the Treasure World in-game economy in an instant. Seriously.

[Via What They Play]

LoadingReadyRun: How to Find Free Wifi Graham_LRR 67 Comments
Comments on