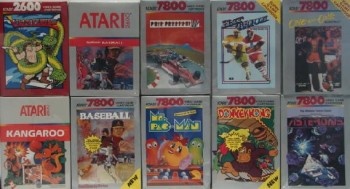 If you're interested in picking up some classic Atari game cartridges you might want to look inside a limestone cave 150 feet under the ground in Missouri, where O'Shea Limited has about a million of them in storage and up for sale.

Times were tough for Atari in the late 80s and as the company struggled to stay afloat, it began shedding excess inventory, particularly its massive overstock of game cartridges. O'Shea Limited, a Kansas City based clearance company, bought the entire stockpile: Roughly three million brand-new cartridges of Joust, Galaga, Dig Dug, Donkey Kong and more, all of which went into storage in a 20,000 square foot warehouse carved from unused space in a limestone mine.

Since then, the company has sold off about two million cartridges and continues to offer the remainder for sale. In an interview with GameSetWatch, O'Shea President Bill Houlehan talked about who buys these things, what's happened to the market over the years and how he ended up with three million Atari cartridges in the first place.

"We've been in the closeout business for many years and we were notified by Atari that they were selling everything off," Houlehan said, adding that there was "heavy bidding" for the inventory. But the demand for the product wasn't an attempt to tap into the nascent collector market; it was a straight commercial investment that had immediate payoffs at the retail level. "We had a great deal of business from overseas. We were selling container loads of games to a company called Intertoys based out of Holland," he continued. "At the time we purchased the inventory, Atari collecting had not taken off. That really happened in the last few years."

One indication of the rising popularity of game collecting can be seen in the number of people who order more than one copy of the same game. "We have numerous buyers who buy two of each game so that they could play one set of the games and then they can put the other set of games aside as a collectible set," Houlehan said. His most popular games are Pole Position, Ms. Pac Man and Dig Dug. "So many of our customers say how they feel like a kid again when they get these games," he continued. "Atari started the videogame industry and they built themselves on games like Pole Position and Ms. Pac Man."

He also claimed that the announcement of a movie about the life of Atari co-founder Nolan Bushnell has driven a "drastic spike" in cartridge sales over the past few months. "It is bringing back childhood memories around the Atari console," he said. "Their kids have the Wii, but they were the generation of the original videogamers and many customers want to bring back a piece of their childhood with these games and also show their children what they grew up on."