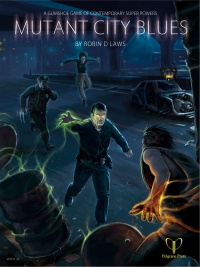 Who did it? That's up to you to find out in a competition to solve the mystery in a new pen and paper role playing game, Mutant City Blues.

The lifeless body of Karen Das was found at 10:30 this morning by hotel cleaning staff at the Fiesta Holiday Casino on Dean Martin Drive. Das, 27, appeared as a contestant on this summer's GBC television reality series, Stir Crazy.

Mutant City Blues starts with a simple concept: Imagine if a "ghost flu" hit the world and within the next ten years, people started developing "powers." While the rest of the world has its own superpowered beings, your city is the Gotham or Metropolis of this new world.

The Police realize that they stand no chance against Supercriminals, so the government has offered jobs to all mutants as the elite Heightened Crime Investigation Unit. No spandex for you unless you want to practice your bullet soaking powers, though - this isn't the movies, bub.

As for the competition, Pelgrane Press has provided all of the clues needed to solve a despicable murder on the set of a quiz show. You simply need to tell them how it was done as well as who did it, but you'll have to do a bit of legwork to figure it out. You'll have to read through statements, pick up on clues of what powers have been used and dig the truth from the lies in the press reports.

You've got until March 1st to solve the crime. At stake is nearly $200 of role playing materials. Start sleuthing!