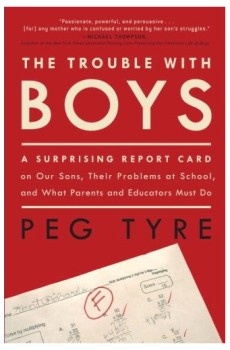 A new book by senior Newsweek writer Peg Tyre suggests that the backlash against violent media may actually be doing more harm than good as young boys are prevented from taking part in "perfectly normal" fantasies and play.

"Boys get expelled from preschool at four times the rates of girls," Tyre wrote in The Trouble With Boys. "They are prescribed the lion's share of ADHD medication, they get most of the C's and D's in middle school, and they drop out of high school more than girls. Currently, only 43% of undergraduates in the United States are men." And just what is the trouble with boys? According to Tyre, a large part of it is the increasingly negative view society has toward their normal and natural aggressive fantasies.

"We might see them as doing something potentially dangerous," she told parents during a recent lecture. "But actually what they're doing is playing around with ideas of courage and valor, good versus evil, and teamwork. These are ideas we want to inculcate in our culture."

The real hysteria against violence began in the mid-to-late 90s, she said, brought about by a rash of high-profile school shootings like that at Columbine High School in Colorado. The zero-tolerance policy toward violence that emerged "sounds good in theory," she said, but can also result in activities as innocent as running and playing tag being discouraged.

"We're in this place - as a culture - where smart, right-thinking parents discourage their sons from violence," she told Ars Technica. "It's perfectly normal for little boys to think and talk around violence; it doesn't mean they're going to be violent."

"You're often playing a heroic role," she continued, explaining that videogames can be useful both as an outlet for violent fantasies as well as for stimulating mental growth. "I think that sense of heroism has been around since Greek drama. If you want to get into violence, look at The Odyssey or The Iliad. Homer's stories are very violent... but we regard them with less suspicion."

She admits that her opinion of games wasn't very high when she began the book, calling herself a "videogame hater" and saying it was "unsettling" to watch her sons play on the Xbox. "[It felt like] carnage in my living room," she said. "I didn't like that they played for hours at a time and that it was hard to get them to take a break... I was prepared to write a very negative chapter about video games." But when her sons suggested she try some gaming with them before making her final judgment for the book, she gave it a shot and found her opinion changing. She also noted that despite the conclusions of On Killing, Lt. Col. Dave Grossman's highly critical 1995 look at videogames, the surging popularity of violent games has actually corresponded to a dramatic decrease in violent crime, including murder, rape and robbery, among young men.

"I sat down and played Halo with them, and while I saw that it's very violent, I also saw that it's a very condensed form of violence," she said. "So I started to take a different view about video games: Maybe I should be a little less hysterical about them."