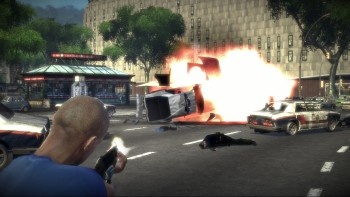 That other game starring Vin Diesel is still due in stores March 24, only now it'll come with an extra logo on the box.

The always troubled publisher announced this morning that it'll be getting a helping hand from a French connection when it comes to next months release of The Wheelman as Midway has formed a "strategic relationship" with Ubisoft to publish the Vin Diesel action title. What exactly makes the relationship strategic? Well, if you live in North America, South America, Australia, New Zealand, France, Germany, Austria, Switzerland, Ireland or the United Kingdom, you can look forward to finding the familiar purple swirl of Ubisoft on the front of the box. If you live in other European territories, however, not so much, as Midway will still hold publishing rights in those locations.

Midway, which filed for protection under Chapter 11 bankruptcy last week, will still continue development of the title through it's England studio and will retain all future franchise rights to the series.

"Ubisoft's decision to join Midway in a co-publishing agreement is a gratifying validation of Wheelman's potential," said Midway CEO Matt Booty. "Ubisoft has a proven expertise at bringing new IP to market, which will allow us to reach a broader consumer segment with Wheelman, while helping Midway to balance the risk profile of our product portfolio."

This can be viewed as a pretty good deal for Midway on a day filled with nothing but bad news, as GameDaily reports that Midway's stock has finally been delisted from the New York Stock Exchange, having been in peril since November 2008.