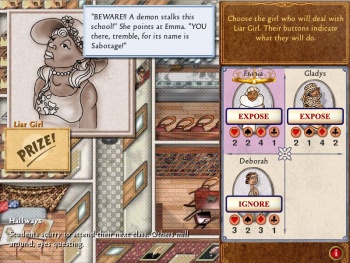 Indie game Dangerous High School Girls In Trouble has been pulled from Big Fish Games, a casual games portal, for an implied rape scene deemed inappropriate according to the site's standards.

Dangerous High School Girls In Trouble!, which was recently nominated for an award from the Writer's Guild of America for videogame writing, seems to be living up to its name. Big Fish Games, a casual games hub with a "family-friendly" atmosphere that previously played host to the tile, has deemed the game inappropriate for the site based on a scene toward the end of the game that apparently contains some not so G-rated material. "To be transparent with you all, the scene that was brought to our executives' attention was a branch in the story that resulted in the implied violent rape of a woman in graphic detail," Paul Thelan of Big Fish wrote.

The "graphic detail" described by Big Fish, however, seems to be fairly minor. Keith Nemitz, the lead designer of the game, responded by quoting the scene in question: "(person's name) overlooks her unconscious form, trousers dropped to his ankles. Nail marks and bites on his arms seep red." Maintaining that "no rape actually occurs in the game," Nemitz explained that in the scene the protagonist end up shooting the attacker before he can do anything and ultimately save their friend. "Yes, it is emotionally intense, but no more so than a similar event in the movie The Journey of Natty Gann from Walt Disney pictures," Nemitz said.

Thelan maintained that the removal of the game is not an act of "censoring content" but a "judgment call" that had nothing to do with whether or not the scene was family-friendly but simply because it wasn't the kind of thing Big Fish Games represents as a brand. He also admitted that the scene was "not spotted by our testers prior to release," though, according to Nemitz, "everyone who plays will eventually encounter it, as it is a plot element critical for the ending of the game."

User reaction to the removal of the game has been split. "Games, movies, and tv always get ruined with gutter type stuff in my opinion," user Rose247 wrote. "I did not notice any women in the credits of who worked on this game, so maybe that's why the game went dark." What's "gutter type stuff" for one gamer might contain a valuable life lesson for another, though. "[The scene] is a striking event that reminds one that women (and men) are not safe, unless they are prepared to defend themselves and others," Ewonka wrote. "It's a message I would want to teach my older children, to respect the real troubles in the world, to prepare for but not fear them."