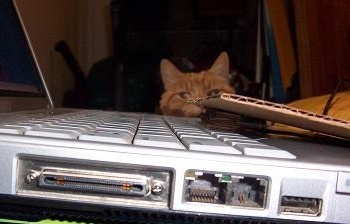 Want to install some new software while avoiding the dicey legal entanglements of mile-long EULAs? Get someone else to do it for you. Your cat, perhaps.

We're all familiar with End User License Agreements, yet very few of us are aware of what's actually in them. They're a minor inconvenience, a wall-of-text speed bump on the road to getting our software installed, and yet for all we know we could be promising our firstborn to Peter Moore as we blindly click through them. And while the legal enforceability of these agreements has come into question recently, one woman has decided to sidestep the matter altogether by offloading responsibility for accepting these contracts to another member of the household - her cat.

Anne Loucks began the process of enlisting her cat's aid by creating a large, custom-built button (a piece of cardboard with "Kitty Agrees" written on it) for her feline assistant, named Simba, to press. She then placed it appropriately upon her laptop and after tabbing the focus to the proper onscreen button, attracted Simba to the keyboard with the promise of some lovin'. Voila - Kitty agrees!

How this kind of devious legal machination would hold up before a judge is questionable, of course, a fact Loucks acknowledges in The Agreeable Cat. "As he is not a legal entity, I don't really know how kitty's agreements would stand up in court, but I like to think he would be responsible for any breaches of contract, assuming the agreement is even enforceable," she wrote. "After all, he is not even of legal age, at least in human years."

And if you don't happen to have a cat around, she noted that other options are available. "This same strategy could be used with small dogs, children (preferably the neighbors') or even a carefully crafted button presser that moves up and down as the wind sways a tree outside your window," she continued. "Mother nature is responsible for the license agreement! I swear!"