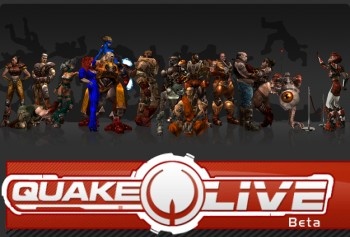 id mastermind John Carmack says Quake Live, which entered open beta yesterday, is a way to give the PC platform a chance to "stand alone" in an increasingly console-centric world.

"A lot of this project was about doing something that the PC was going to be better at than the consoles," he said in an interview with Gamasutra. "Our modern triple-A stuff has to be somewhat more console-centric, with the PC as a peer, while this is an opportunity to do something where the PC will really stand alone."

What makes the PC stand alone is its ability to fully integrate with the web in areas like social networking, communications, leaderboards and friend lists. Quake Live's browser integration is a key component of that formula, he said, noting that those aspects of the game "certainly appear to some degree or another on the consoles, but are just a lot more fleshed-out and have more depth with what we can do here."

Quake Live will support full-screen play but Carmack said he expects few people to bother with it. "It'll be interesting to see if hardcore people play full-screen still," he said. "But I suspect that probably there will be a lot more people, as our user base grows, who are playing it just in the browser window."

"I'm curious to see how that actually plays out in the end, how many people look at it as a serious gaming experience and just use the portal to get there, versus the people for whom the portal is a large chunk of the experience," he continued. "For years, I've often thought about the fact that a lot of people spend vastly more time on websites and forums about the games that they're playing than they actually spend playing the games themselves. We hope to have some aspect of that here."

Quake Live is a browser-based online multiplayer FPS based on id's 1999 release Quake 3 Arena and the Quake 3 Team Arena follow-up. The game won't support mods but during the 2008 QuakeCon Carmack promised ongoing updates and support for the game and said it may also offer "officially approved" user-created maps. Sign-ups for the open beta are being taken at www.quakelive.com but the servers have been overwhelmed since opening yesterday; at the time of this writing I'm in position 43,433 in the queue to access the game, which means that with luck I'll be playing by late Friday.