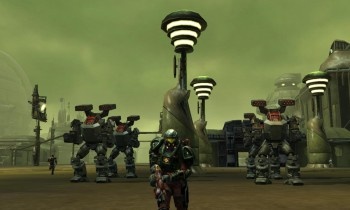 NCsoft's failed MMOG Tabula Rasa is coming to an end tomorrow but apparently won't be going out quietly.

Tabula Rasa is rather unique among MMOGs, not because it was an overhyped mess that came crashing down only a year after it launched, but because of what's happened since. Normally when an MMOG goes belly-up, the end-days are ugly. Developers and support staff take their balls and go home, leaving players who remain in an increasingly barren and forgotten realm. But not so Tabula Rasa: After getting the chop in late November, the game went free in December but unlike most MMOGs that wind up their final days with free-to-play action, Tabula Rasa continued to accept new players.

Even stranger news came in mid-February, little more than two weeks from the close date, when a patch was released that not only fixed a few bugs but also updated some visuals and added new content, including new weapons and five models of mech suits. The update included a message saying that changes to certain parts of the game were being made "in preparation for imminent Bane hostilities," a line that looked at the time to be nothing more than a bit of off-the-cuff fiction for TR die-hards.

But it turns out there's more to it than just that. According to what will be the last Feedback Friday post, those Bane hostilities really are imminent. Making things worse, the Bane have apparently joined forces with the Neph - a far more technologically advanced faction of bad guys - to launch an all-out assault on Allied Free Sentient forces. Faced with near-certain destruction, the AFS has wheeled out the Doomsday device.

"We request that all military personnel begin fortifying defenses at every AFS base in preparation for a massive Bane assault," the final message says. "If enemy troop movements are as large as we fear, and the Neph are truly prepared to lead all out war against us, this may be our last stand. Penumbra has been informed of the situation and is standing by on the use of their last resort weapon. We can not afford to be complacent or uncertain, but if it is truly our destiny to be destroyed, we are taking them all with us. Good luck and godspeed."

It's fun to see such dedication and enthusiasm among the staff of a game in its final hours and I can't help but feel a twinge of regret over its passing as a result. On the other hand, maybe that imminent demise is what's allowed them to cut loose like this in the first place and if so, it's a lesson for MMOG developers everywhere: If you make things fun from the start, people might keep giving you money.

The final assault begins at 8 pm GMT on Centaurus and then at 8 pm CST on Hydra. Game servers will shut down around midnight in both time zones. Suit up, load up and let 'em come!