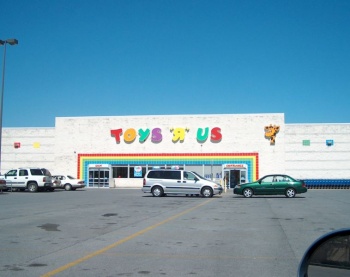 Toys R Us is testing the waters of the lucrative used games market by buying and selling used games at a select group of stores for the next three months.

"We are testing out a program at a couple of our stores in the New York area," Bob Friedland, a public relations manager for the retailer, told Kotaku. "We are selling used games in the stores participating in the test."

The test phase began four weeks ago and will last for the next twelve weeks, according to CheapAssGamer reader phear3d, who spotted a sign at a Nanuet, New York store recently. According to the promotional signs at this particular TRU, stores will be buying used games for store credit, and not cash. Games have to come in their original case and come with the original box art and manual, which is not the case at GameStop, where they'll accept a used copy of Burnout Revenge in a CD case with box art printed off the internet.

Similar to GameStop, TRU won't accept cracked discs or "A" rated games, which we can only presume means things like RapeLay. As for the selling part of the equation, the Nanuet TRU already had a couple of things for sale: the original Rock Band on 360 for $30 and Puzzle Quest for $18. The retailer accepts games for all platforms, including last-gen systems like the original Xbox.

Again, not every Toys R Us will be participating in this test, so call your local stores before driving out to dump your used copies of Leisure Suit Larry.