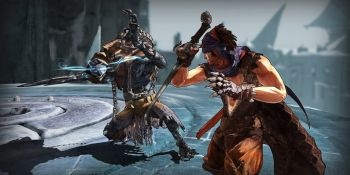 A round of congratulations is in order for Ubisoft, which has been awarded the title of "world's least consistent videogame publisher" in a new analysis of data accrued by Metacritic.

The results are based on a scoring system formulated by GameQuarry which assigns point values to various Metacritic scores. Games with scores in the 90-100 range are worth two points, games in the 80-89 range are worth one point and scores of 70-79 are worth nothing. On the other end of the scale, games with Metacritic scores of 60-69 got a -1, and anything under 59 got -2 points. The totals were then added up to determine the most and least consistent publishers in the business.

Topping the charts, to no one's great surprise, is Rockstar, which scored 19 points across 23 titles. In second place with 14 points over 23 games is Telltale Games, a lesser-known publisher that's done well for itself with the new Sam & Max and Strong Bad games, while Blizzard came in third with 11 points over seven titles.

At the opposite end of the scale is Ubisoft, bringing up the rear with -148 points over 237 titles. Activision doesn't fare much better, scoring -138 on 227 games, while THQ is third from the bottom with a -120 score across 150 games.

Games in the analysis were limited to titles on the Xbox 360, PlayStation 3, Wii, PC, PSP and DS, and had to be have a minimum of four reviews for their Metacritic scores to be included. GameQuarry also cautioned against reading too much into the data. "It is imperative to keep these results in perspective as they do not reflect trends towards an increase or decrease in quality trends," the analysis noted. "For example, a publisher on the 'Most Consistent List' may in fact be trending towards a decline in quality whereas a publisher on the 'Least Consistent List' may trend towards an increase in quality. It is also entirely plausible that the publisher noted may be a standout leader in a particular genre or platform but performing poorly in another."

The value of the Metacritic data from which the results ultimate derive has been the subject of recent debate, as David Perry points out on his blog. "Let's just say many of my friends are having a very heavy discussion (right now), on the validity of the Metacritic data," he wrote. "So this is incredibly timely and will add fuel to that fire for certain!" Some critics say its scoring system is unbalanced while others have complained that some reviews are inappropriate for certain games and should be excluded from scoring.

Perry claimed the results "surprised the heck out of him" but most of the entries, at both ends of the list, don't strike me as overly shocking, nor does the fact that the most consistent publishers have put out a relatively small number of titles while those with the worst scores have a far larger catalog to their credit. Aside from Microsoft and Nintendo at 110 and 102 releases respectively, no other publisher in the top ten comes close to even 50 games published, while at the opposite end, only Majesco, Strategy First, Namco and DreamCatcher have published less than 100 - and with 98 games on the shelf, DreamCatcher is just barely off the mark.

It's clear that consistency doesn't equate with quality when it comes to individual releases and the scattershot approach to publishing taken by companies like Ubisoft and Activision will inevitably, perhaps even obviously, result in an inconsistent record of hits and misses, particularly when compared to the focus of publishers like Blizzard and Bethesda. But aside from codifying the data, is this really telling us anything we didn't already know?