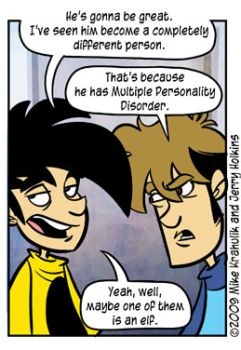 The Washington State Senate and House of Representatives have passed resolutions honoring Gabe and Tycho of Penny Arcade for their work in the videogame industry and their contributions to worldwide charity for children.

Introduced by Washington State Senators Fred Jarrett, Rosemary McAuliffe and Karen Fraser, Senate Resolution 8640 notes that more than 45 videogame companies make their home in the greater Seattle area, making Washington's videogame industry one of the largest in the U.S. The area's reputation as a "leading locale" for the industry has been further bolstered by the runaway success of the Penny Arcade Expo, which debuted in 2004 and has since grown to become one of the largest gaming conventions in the country.

What really stands out, however, is Child's Play, the charity created by the duo in 2003 to provide toys and videogames to hospitalized children. Like the Penny Arcade Expo, Child's Play was launched to support a local Seattle hospital but quickly became a worldwide phenomenon that has raised nearly $5 million dollars for hospitals throughout the U.S. and in Canada, the U.K., Australia, New Zealand and Egypt.

"Now, therefore, be it resolved that the Washington State Senate officially recognize the accomplishments of Jerry Holkins and Mike Krahulik (that's Tycho and Gabe) in becoming widely accepted leaders in the computer and videogame industries, encouraging industry growth through scholarships and advancing Washington State as a hub of the gaming industry through the presence of Penny Arcade Expo," the resolution reads.

"Be it further resolved that the Washington State Senate honor Jerry Holkins and Mike Krahulik for their hard work and dedication to improving the lives of hospitalized children worldwide through their creation and continued work with Child's Play Charity," it continues.

The pair won't receive any cash or fabulous prizes for this win, just copies of the resolution for each of them and the good feeling that comes with being recognized for their hard work. Oh, and the knowledge that somewhere in the world, Jack Thompson's brain is dangerously close to exploding. The full resolution, with all its wherases and be-it-furthers but not a single f-bomb in sight, can be read here. Well done, lads.

UPDATE: It turns out the Senate wasn't the only arm of the State Legislature to recognize the work of Penny Arcade. The House of Representatives passed a similar bill, introduced by Representative Deborah Eddy, the same day. Grab a copy of your own right here.

Everybody Dies in DEFCON Jonathan Glover 28 Comments
Comments on