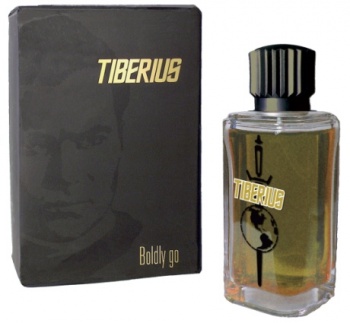 Looking to score a hot date for the Star Trek premiere? Here's your ticket: a brand new line of Star Trek fragrances designed to make you as irresistible as Captain Kirk himself.

The words "Star Trek fan" and "smell" typically conjure thoughts of a scent that's a mixture of body odor, Cheetos and nylon, but this new line of Star Trek-themed colognes and perfumes is aiming to change that. Based on the original show and not the newfangled movie, the fragrances come in three varieties: Tiberius, Red Shirt and Ponn Farr.

The Tiberius cologne is named after the Mirror Universe version of Captain Kirk and is highlighted by "notes of freshness and sensuality" according to Genki Wear, the company producing the line. Its scent is composed of citron zest, black pepper and cedar underscored by warm vanilla, white musk and sandalwood. "Tiberius cologne for men is difficult to define and impossible to refuse," says Genki.

Next up we have Red Shirt, a cologne in memory of those anonymous members of the Enterprise who never really got due credit for making the ultimate sacrifice in service of Starfleet. The scent displays a "devotion to living each day as it could be your last" and has hints of lavender, leather and gray musk.

Finally, for all the ladies there's Ponn Farr, a perfume designed to "drive him wild." Ponn Farr gets its name from a Vulcan mating ritual. If you're turned on just hearing that, I think this is the fragrance line for you. I'll stick to spraying myself head to toe with Axe and hoping for the best.