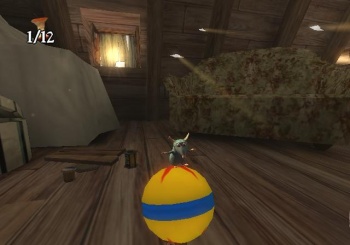 Apparently even kids aren't buying many licensed games based on animated family films anymore, as THQ has reported that these games are no longer as easy a buck as they once were.

It used to be that you'd pity the children who aren't yet cynical enough to realize that the Flushed Away game on the DS was just a poorly-made piece of crap designed solely to rob their parents of their hard-earned cash. But it seems that these days, not even kids are gullible enough to want to buy these games - as THQ has revealed recently, they're become less profitable than they used to be.

"The kids' business, as you know, has been a huge focus of THQ for many years," THQ's Brian Farrell said at the Wedbush Morgan Securities conference earlier today. "But there has been a trend away from licensed TV and movie games, and it's become much more competitive for all participants."

THQ has for some years now held the videogame license for Pixar movies, but what you'd assume to be an automatic cash cow hasn't really worked out that way. The Ratatouille game underperformed, which was understandable, because who wants to play as a rat? But Wall-E, which seemed like a sure shot with its adorable robot protagonist, performed even worse than Ratatouille.

THQ doesn't think this has anything to do with kids' tastes shifting or their options widening with the greater variety in available games nowadays, but rather the changes that have occurred in the animated film scene itself. "Back when we took the Pixar license on several years ago, Pixar was the only CG animated film company, and now there are several... up to 10 or a dozen CG animated films each year," he said. "So it's much more competitive -- which means that the kids' pie is getting sliced in smaller pieces, which makes it less profitable."

Could be, or maybe they'd just rather play Imagine Turtlz than Cars DS.