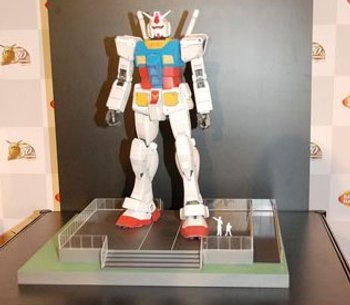 The Japanese are getting their Statue of Liberty: a life-sized, 59-foot tall upright Gundam.

Over in Japan, they take their Gundam seriously, and when the franchise celebrates its 30th anniversary later this year, a new movie or anime series just ain't gonna cut it. No, the only proper celebration is erecting a life-sized, 59-foot-tall Gundam statue in Tokyo this July.

Built from fiberglass-reinforced plastic on top of a steel frame, the statue will be up for only two months in Shiokaze Park. It'll be a sight to see in broad daylight, but even moreso at night: fifty points on the statue will shoot out light and another fourteen points will emit mist for maximum coolness.

This isn't the first time a gigantic Gundam statue has been built in Japan, but it's the largest scale project yet. So far, there's been a 33-foot-tall statue and a 23-foot-tall one, as well as another life-size one, but that one apparently couldn't stand upright and was built lying on its back.