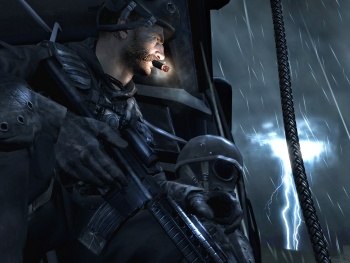 Everyone knows that Call of Duty 4: Modern Warfare is a supremely popular game, but you might be surprised to know just how popular it really is.

While accepting one of the game's 3 BAFTA Awards (that's British Academy of Film and Television Arts to us Yanks), Infinity Ward Director of Communications Rob Bowling made a statement announcing the game's milestone 11 million unique players. 11 million players means that a solid two thirds of the 17 million Xbox Live users have played the game at some point.

The 11 million users figure includes Xbox Gold and Silver account members as Microsoft has only roughly 9.5 million paying Gold customers. What the number doesn't include is those without any internet connectivity to their 360s, or no registered Live account, meaning the number of CoD 4 players on Xbox 360 is likely even bigger than 11 million.

This huge figure obviously doesn't include the 4 million players on PSN, or the unspecified number of PC players, bumping the actual number of people who played CoD 4 to far beyond 11 million.

Infinity Ward's take on the Call of Duty franchise has been a huge success on all counts, thanks in part to its combination of fantastic single player campaign, and what's arguably one of the best console multiplayer experiences available.