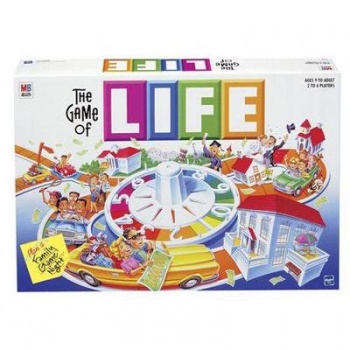 Conservative Christians have been up in arms over a certain PC game "pushing the homosexual agenda". The game in question? Classic board game The Game of Life.

For those who are unfamiliar, in Life you drive your little car around a track the represents your path through life, moving from "leaving school" to "marriage" and "buying a house" until "retirement," collecting pegs to represent your spouse and children, while trying to build up enough money to retire rich.

Hasbro's PC version of the popular Milton Bradley board game was first brought to the attention of the Conservative Christian site World Net Daily by a concerned mother.

"You know how kids are," said the unnamed mother. "My daughter noticed right away (even before I did) and clicked on one of the girls instead of one of the men and then asked, 'Mom, how come I can marry a woman?' And then that led into a lot more questions that, quite frankly, I was not ready to talk to my 6-year-old about."

She continued, "I went back to the web site and left a very respectful review of the game just stating that this kind of thing should be left out of kids' games, and the Shockwave.com administrator removed my post, stating it was inappropriate. I had no idea how insidious they were being with pushing the homosexual agenda."

The modern version of the board game, made back in 1960, allowed for gay marriages as well; there was nothing preventing players from having a pair of pink or blue pegs representing their married couple.

What it didn't allow for, which annoyed me far more as a child, was the ability to bypass marriage altogether; as at that time girls were just yucky anyway.

X-Com: The Truth Is Out There Alan Au 33 Comments
Comments on