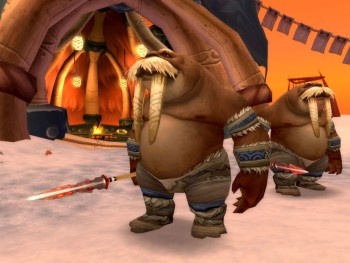 China's refusal to authorize the release of Wrath of the Lich King could be a big problem for Chinese World of Warcraft operator The9, which says it will go bankrupt if the expansion isn't released.

Authorities in China announced last week that Wrath of the Lich King, the latest expansion for Blizzard's hugely popular MMOG World of Warcraft, would not be approved for release in the country due to concerns about objectionable content, most of which is centered around the presence of undead skeletons in the game. The Chinese release of the previous expansion, The Burning Crusade, faced similar issues and was delayed so modifications could be made, including the addition of flesh to skeletons.

The process appears more urgent for The9 this time around, however, as the company claims it will go bankrupt if the Chinese government refuses to approve the game. The9 actually paid, probably through the nose, for the Chinese rights to Wrath of the Lich King a year ago and has presumably sunk a good chunk of money into localizing it for the Chinese market as well, and needs to see a return on that investment. According to The Register, the company earns nearly all its profits from operating World of Warcraft.

It may be hard to imagine anyone going bankrupt while running a game as popular as WoW but that very popularity may be working against The9 in this case: Along with high day-to-day operational costs, WoW Insider says there are rumors that many Chinese players have abandoned The9 and set up Taiwanese accounts instead, where the expansion has been available since late last year. China's General Administration of Press and Publication is still considering the matter.