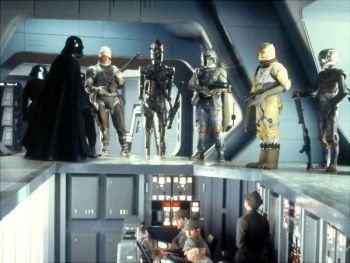 Good news for Star Wars fans who just can't get enough Zuckuss: BioWare has confirmed that a Bounty Hunter class will be playable in the upcoming MMOG Star Wars: The Old Republic.

The Bossk-style Bounty Hunter class is the third to be revealed by BioWare, following the obvious Jedi and Sith classes, and like them, the Bounty Hunter will get its own "epic" story arc. "You're going to have as much choice in that one class as you would have had in an entire BioWare game before, because every single class gets its own story, and that's a story personal to the player," said Old Republic Lead Writer Daniel Erickson. "He gets to have his own Star Wars trilogy."

The game will be packed with lightsaber-wielding Jedi and Sith but players with a "bounty hunter fantasy" will be able to indulge their inner IG-88 as well. "These are fully engaged characters, so when you're talking to someone, the camera works just like a movie and if they're getting emotional, they're clearly getting emotional and everything makes sense," BioWare co-founder Greg Zeschuk said in a Eurogamer TV video. "As a player, seeing that is something that will be very surprising to people."

Erickson also revealed a bit more about the setting of the game itself, which takes place roughly 300 years after the events of the Knights of the Old Republic games and 3000 years before the Star Wars movies. "Everything is very, very tense," he said. "We are not talking cold war, we are talking constant border and skirmish war, because nobody is quite ready to say 'OK, let's throw the entire galaxy back into conflict again'."