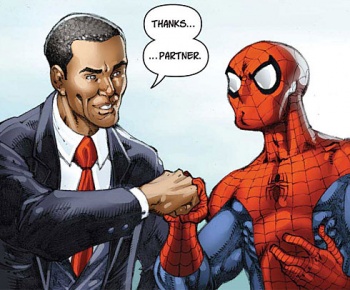 Marvel Comics has signed a 10-year licensing deal for a MMOG based on its universe with relatively unknown developer-publisher Gazillion Entertainment.

The idea of a Marvel MMO has been around for quite some time now - initially, the title was in the hands of City of Heroes developers Cryptic Studios, but was canceled early in 2007, with some of the framework being used for Cryptic's own Champions Online. With Cryptic's cancellation, it was uncertain whether fans of the Marvel Universe would ever get the chance to visit it in MMO form.

Until now, apparently. Gazillion Entertainment announced yesterday that the company had signed a 10-year licensing deal with Marvel Comics to create online videogames based on the universe. The first of these will be an online game based on the kid-oriented Super Hero Squad cartoon. The cartoon will air on Cartoon Network this fall, whereas the videogame is expected to launch sometime in 2010.

Of course, the 10-year license means that Gazillion could make any number of MMOGs set in the iconic Marvel world. They could go the route of an all-encompassing Marvel Online, sure, or perhaps break it down into series: X-Men Online, Avengers Online, etc., but retain cross-game functionality a la City of Heroes/Villains?

It's quite a big scoop for a relatively unknown company, but Gazillion (previously known as NR2B Research) has some MMO experience under its belt - notably, as the owner of NetDevil, the developers of LEGO Universe and Jumpgate Evolution.

Anyone care to wager how many characters we'll see with variants on the phrase "I'm the Juggernaut, bitch"?