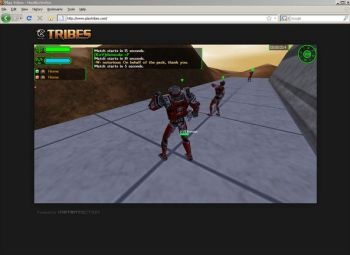 InstantAction has announced that it will be adding the classic online FPS Starsiege: Tribes to its browser-based gaming catalog.

Tribes was probably the first thing to enter the minds of many gamers when InstantAction unveiled the team-based shooter Fallen Empire: Legions as part of its online gaming platform in early 2008. Despite running in a browser window, InstantAction said, "In terms of graphics and gameplay it will set a new benchmark of what the future of gaming will be on the web."

Now, fans of the storied Sierra/Dynamix franchise can set aside any lingering righteous indignation and embrace glee and gratitude instead: The original Starsiege: Tribes, which first appeared on the PC all the way back in 1998, is on its way to the service. A playable version of the game will make its first appearance next week as part of the Game Developers Conference in San Francisco. Few details are available but Kotaku says the game will feature enhanced graphics and better modding tools.

Tribes will actually be the second major FPS from the late 90s to show up in a browser window, following hot on the heels of id's Quake Live, which entered beta in February. The technology for this sort of gaming appears solid - Quake Live loads quickly and runs flawlessly - and while graphically dated, the promise of quick-and-easy "real" gaming via your browser, as opposed to a round or two of Dynomite, is very appealing.