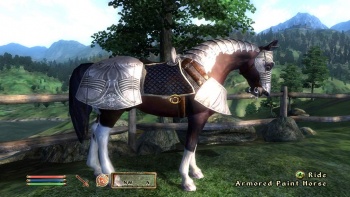 Yes, even you, the stalwart Steam gamer, can purchase horse armor in Oblivion for just $1.99 now that Valve has started supporting in-game sales of downloadable content in all Steam titles past, present and future.

"In-game DLC allows developers and publishers to use their own games as a platform for selling additional content to gamers," Valve's Doug Lombardi said. Yes, that means that paying for new content like stages, extra missions, and horse armor is no longer just something that people who trade dollars for MS Bucks on Xbox Live can talk about. Steam users too can now fully know the joy of shelling out a few bucks for content that, some will no doubt say in their most curmudgeonly voice, used to be free and was called "a patch."

"DLC can now be added to any game on Steam, regardless of whether it was originally purchased via Steam, at retail, or via other digital outlets," Lombardi continued. "It is also a feature of Steamworks, the suite of free tools and services available to game developers and publishers."

The first game to take advantage of the new system will be Twisted Pixel's The Maw, which was available initially only on Xbox Live. The Maw is offering two new levels, titled Brute Force and River Assault, on Steam at the price point of $1.25 each. "We're happy that we can now offer Steam customers significant expansions to the Maw story, delivering more Maw directly to gamers while they're still playing the game," Twisted Pixel CEO, Michael Wilford said.

Don't think this means Valve's going to start charging for TF2 class packs, though, as it sounds like this is mostly a strategy they're setting up to let other publishers do the DLC thing some of them are so fond of and that they can already do on Games for Windows Live.

Perhaps this means we'll start seeing some third-party publishers changing their tune regarding post-launch content that makes it to consoles but not the PC. Now that, say, Ubisoft can charge for the console-exclusive Prince of Persia Epilogue DLC and do it by way of an extremely popular platform like Steam, PC gamers might be seeing more previously console-only content coming their way. Just not for free.