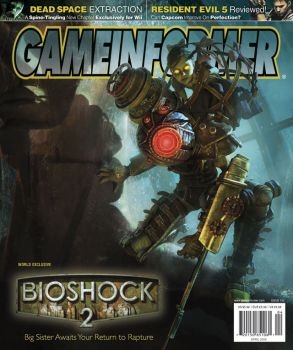 Despite earlier statements to the contrary, BioShock Creative Director Ken Levine says he is "not involved" with the development of BioShock 2.

Development of BioShock 2 was transferred from the 2K Boston studio to the newly-formed 2K Marin operation amid rumors on the Surfer Girl blog suggesting the move was made at least in part because a significant number of employees who worked on the original game were "sick of Ken" and "did not want to work with [him] ever again." But when he announced the sequel, Take-Two CEO Ben Feder said Levine was "critical to BioShock" and was in fact working on BioShock 2 as well a separate IP at 2K Boston, although his actual role remained unclear.

But Levine himself now says that while he's "excited" about the new BioShock title, he's actually not involved in it at all. "Right now I am focused on making our next big project at 2K Boston," he said in the most recent issue of Game Informer, which also has the first look at the upcoming sequel. "While I'm not involved in BioShock 2, I'm really excited to see what the talented team at 2K Marin, some of whom worked on the original BioShock, comes up with. I can't wait to play it."

BioShock 2 Creative Director Jordan Thomas described Levine's non-involvement as "voluntary," although he very diplomatically added that the door hadn't been closed on the BioShock creator entirely. "He's not substantially involved in BioShock 2, but we all have a ton of respect for him and learned a lot," he said.

If Levine isn't involved with BioShock 2 then the obvious question becomes, what is he up to these days? Aside from playing a ton of Left 4 Dead, Resistance 2 and Warhammer Online, Levine appears to be gearing up for a big project at 2K Boston with at least some ties to the studio's earlier releases. Rumors about either an X-Com revival or System Shock 3 have been persistent and while Levine's lips are sealed, confirmation of either would go a long way toward helping gamers forgive and forget his absence from BioShock 2.

The Escapist Presents: The Final Round of March Mayhem 2014! Valve vs. Firaxis! GameFront 10 Comments