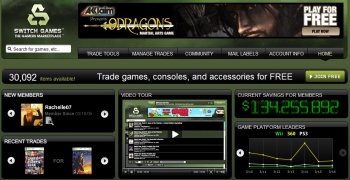 SwitchGames, a new site for trading and buying/selling games, doesn't just want to compete with its rivals in the used games market. It wants to change the entire face of the games industry.

"It's a greater movement, this shifting of power," SwitchGames founder and CEO Jason Crawford said of his site, a new face in the suddenly competitive used games market. In the past couple weeks alone, the used games racket, which is currently dominated by retail juggernaut GameStop, has gotten a little bit more crowded. Amazon and Toys R Us have announced plans to try their hands at the business.

The "shifting of power" that Crawford is talking about is what he sees as his site's advantage over its big-name competitors. Instead of acting as an outlet for buying and selling used games, SwitchGames figures itself as an open and, moreover, safe marketplace for gamers to do their own business. "Gamers don't perceive their games as equity," Crawford said, explaining that gamers see games more like movie tickets with one-time prices than like houses, which they can buy, sell and leverage the worth of.

So, your copy of Saints Row 2 can be like a house. On the site you can put it up for trading, and, eventually, buying and selling. The process is straightforward - you just list the games you have and the ones you want. Then you make trades, which the site can match for you or which you can arrange for yourself. You can trade multiple games for single ones, and vice versa.

Signing up is free, as are the site's social networking and community features and of course the actual trading, but if you pony up a few bucks, SwitchGames will make sure your exchange is extra-safe: instead of the traded games going directly into the postal service and risking getting lost, they'll go to SwitchGames, who will check out the condition of the games and make sure there's no funny business going on before sending them along their way.

Anyone who's ever gotten scammed on eBay or Craigslist (me) should be relieved to hear that the company's taking extra measures to make sure you don't get screwed. Indeed, "safety" is one of the key words for Crawford and his team.

As for the controversial issue of used games themselves, which publishers and developers have frequently argued cut game makers off from due profits and only serve to fatten retailers' pockets, SwitchGames has its own shot at an answer. When you buy/sell a game on the site, you can choose to make out a portion of the cash to the publisher. According to Crawford, publishers have been receptive of the idea if a bit skeptical.

For Crawford, the site is an "end-to-end solution for the industry." That could be true, and it is no doubt an interesting project. Not to mention it's nice to see a new and independently-minded face among all the big corporate ones. Whether it'll catch on or not, only time will tell.

Jimquisition: Used Games Have A Right To Exist Jimothy Sterling 316 Comments
Comments on