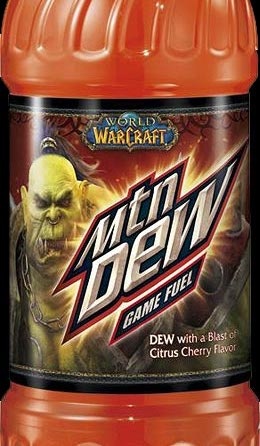 Fans of Mountain Dew's inexplicably delicious sugar-filled elixir otherwise known as Game Fuel, your drink of choice has returned. Game Fuel is coming back this summer, in World of Warcraft form.

In the weeks leading up to and following Halo 3's launch, there was only one drink to be drank among caffeine junkie gamers. No more Red Bull. No more coffee. No more Bawls. The one true gamer beverage had arrived, and it was orange-red and had the Master Chief on the can, or the bottle, or the homemade jug that you drank it out of. Halo 3 Mountain Dew Game Fuel.

Sadly, Game Fuel-aholics who couldn't afford to spend exorbitant prices for limited edition sodas on eBay have been without the drink ever since Pepsi stopped producing it. There's been a Master Chief-sized hole in the hearts of many a Game Fueler since then.

However, if you are fueled by game and have a love of, or even just a tolerance for, World of Warcraft, look ahead to this summer, because Blizzard and Pepsi are teaming up to bring the drink back. "In the near future, you'll be able to see World of Warcraft characters in a new place -- the beverage aisle," Blizzard wrote on the WoW site. "We'll be announcing further details in the coming months, so stay tuned."

World of Warcraft Game Fuel will come in two flavors (the Halo 3 drink only had one): Horde Red, which will be for the savage and chaos-driven Game Fueler who craves citrus-cherry syrup in their blood, and Alliance Blue, which will be for those goody-two shoes with a taste for "wild fruit." The bottle designs feature an Orc and a Night Elf, and are emblazoned with the soda's "MTN DEW" logo. Because vowels are so not extreme.