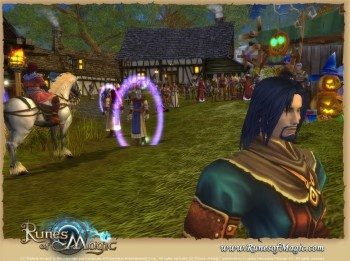 Frogster has announced that free-to-play MMOG Runes of Magic has completed beta testing and is now open to the public.

It was sort of open to the public before, I suppose, as the game's open beta attracted more than 500,000 players, but now gamers can officially leap into "Rise of the Demon Lord," the first chapter in the new game set in the fantasy realm of Taborea. Players who signed up during the beta phase can continue to use those characters but the full version of the game will feature a greatly expanded world with new quests, instances and content.

Runes of Magic features a dual-class character system and over 1000 quests set across an "enthralling background story." The game's seamless design means there are no zone boundaries to contend with, while both instanced and persistent dungeons are available. Rounding things out is an optional PvP and guild war system along with other standard MMOG features like unique mounts, an "epic" crafting system, an in-game auction house and much more. Although originally created by Taiwanese developer Runewalker, Runes of Magic is tailored to "western MMO standards."

Free updates and add-ons are planned for release every four to five months, and a new coastal area with a "distinctly pirate flavor" called Ravenfell is set to open soon. Sign-up information and the free Runes of Magic client can be found at runesofmagic.com.