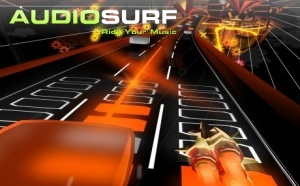 Apple's announcement of the newest version of the iPhone operating system, which allows applications to access the phone's library of music, might be paving the way for the release of popular music game Audiosurf on the device.

When Apple revealed the iPhone OS 3.0 earlier this week, there was plenty to be happy about, but there was plenty to be a bit wary of, as well, especially what looks like an incoming tsunami of microtransactions in games and other applications. Here's something to add to the good category, though: the new OS might allow 2008's popular music game Audiosurf to come to the iPhone.

The idea of a portable Audiosurf has seemed pretty obvious for awhile, but developer Dylan Fitterer has kept the game PC-exclusive because there isn't really any other platform that works with the central idea of building a game out of a music collection. With the iPhone's OS 3.0, however, applications (like games) will be able to access data from the device's memory, including its music library. Seems perfect, doesn't it?

iPhone site The APPera thought so, and they wrote to Fitterer letting him know about the OS update, since the beta of the OS is apparently out and available for developers to tinker with. Fitterer replied shortly afterward, saying enthusiastically: "Woohoo! I'm on it!" Guy sounds pretty psyched, so we'll take this as an unofficial confirmation.

Audiosurf, if you don't remember or never played it, is a driving game of sorts that takes files from your computer's music collection and uses each track to generate a unique level based on the rhythm, instrumentation and general musical DNA of that song. So a song full of tempo changes is a real roller coaster ride, while something more placid makes for a more low-key experience. Can't wait to play some Phil Collins ("In The Air Tonight," no doubt) on the subway.