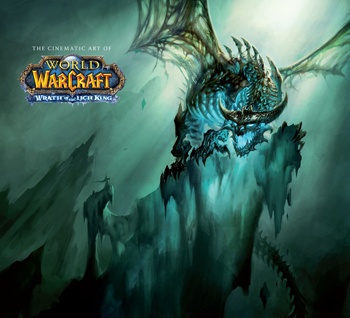 Every now and then, we get sent cool stuff - like awesome books. The Cinematic Art of 'World of Warcraft: Wrath of the Lich King', is one of said awesome books, with tons of concept art for the Lich King intro.

So imagine my pleasure to see a book all about what goes into making one of these cinematics arrive here in our office the other day. The Cinematic Art of World of Warcraft: Wrath of the Lich King is being published by Insight Editions, in a limited run of 40,000.

I've always been a fan of concept art books, so getting a book filled with stunning artwork from sketches to detailed studies to full matte paintings, and a little glimpse of what goes on behind the curtain at the Blizzard Film Department was pretty damn nifty indeed. I'm not alone in thinking this - Escapist Senior Editor Susan Arendt spent quite a while leafing through the book, and I'm not sure she's ever played a Blizzard game. The artwork is simply gorgeous here.

It's also interesting to see some of their canned ideas, and the scraps that might have been before they settled on the current design (for example, I'm looking at a piece of concept art for a version of the eponymous Lich King with the helmet organically fused to his head - obviously, not what the BFD decided to go with). It isn't just art, either - there's plenty of information on the creative process and what actually goes into making a cinematic beyond "put pretty pictures into computer / ???? / Profit!"

If you're one of the 11.5 million currently hooked on WoW, a fan of one of Blizzard's other games, or you just like books filled with really cool concept art, this might be something worth checking out.