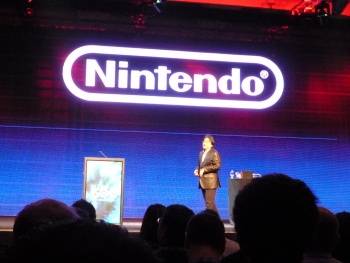 08:55 - Behind me, two gaming journos are discussing Bridge on the River Kwai. Great film, especially if you only know Alec Guiness as Obi Wan. The rest of the crowd is finding their seats. You would not believe the line to get into this keynote this morning - everyone wants to hear what Iwata has to say.

9:00 - Feels like the world's mellowest rave in here. This makes me realize that every keynote should include glow sticks.

9:04 - Aaaaand here we go! The executive director of GDC is welcoming us to the show. She's honored to be introducing Iwata, and points out that he discussed the Revolution - what would become the Wii - when he keynoted in 2005. Could a similar announcement be coming today?

9:06 - Iwata takes the stage and announces that global shipments of the Wii have reached 50 million. It's the fastest growing console in history.

9:08 - Nintendo alone could never have created such growth, though. He gives credit to distribution, manufacture, and the other parts of the machine that keep pushing that money-printing game hardware.

9:10 - Iwata says that we're also part of the support, by playing the games and embracing the consoles. "Thank you from the bottom of my heart. We appreciate all you have done."

9:12 - Iwata is telling the story of how he came to Nintendo, and came to work on the SNES. Two days before it was set to launch, Miyamoto told him that the console needed a few more months of polish before it was fit to release. This created what Iwata calls the "Death Spiral," where financial pressure to release the product competes with the need to put out a good product.

9:15 - Miyamoto is the king of not just seeing opportunity, but seizing it for maximum company benefit. Iwata is going to share his insight into how Miyamoto leverages that vision into success. When Miyamoto sees people enjoying something, he analyzes what it is about that thing that makes it enjoyable. Even if the people don't give any thought to why they're having fun, he does.

9:17 - Miyamoto takes his hobbies and turns them into games. When he gardened, we got Pikmin. When he got a puppy, we got Nintendogs. When he started weighing himself, we got Wii Fit.

--Ideas are Everywhere. Most designers create a thick design document to explain their ideas to their team. Miyamoto almost never does. Personal communication is important.

--The Prototype Stage. Using Wii Boxing as an example, no effort went into the look of the game at first. The boxers were blocks, hardly recognizable. The point of the prototype was to polish the controls until they were perfect, then they could worry about the look of the game.

9:20 - No-one can really comprehend what creates fun, so development involves a lot of trial and error. Sometimes the prototype phase lasts more than two years. Sometimes they have to put a project aside and rethink things, to get a handle on why the element of fun isn't there. Allowing his teams to try and fail, try and fail is key to Miyamoto's design philosophy.

9:25 - "When something is in the prototype stage, I make it a point not to ask how it's doing." Iwata doesn't want to put pressure on the team or mess with their process at all, he just trusts the process and Miyamoto's vision. "However,not knowing how a project is progressing makes it difficult to predict when a product will generate revenue. This is not good for my mental health."

9:27 -- Even when ideas don't work, they aren't discarded. Miyamoto tucks them away for future use. Ideas will come up years later, in completely unrelated projects.

9:30 - Another one of Miyamoto's secrets: "Random Employee Kidnapping." At some point during a game's development, Miyamoto will kidnap a Nintendo employee from the halls, handed a controller, and left to play. Miyamoto believes that he as cannot send a developer to every game where the game will be played, the kidnap victim must also figure out the game on his own. If the kidnap victim is happy, the design team has succeeded; if the victim is frustrated, the team has failed. If the player doesn't have a good experience, Nintendo takes the blame.

9:35 - "In order for consumers to be surprised, we must first be able to surprise ourselves."

9:35 - What happens if a bunch of people with no rhythm try to dance? The video we're watching now. Hoo boy. They may make great games (and Rhythm Tengoku), but twinkle toes, they are not.

9:40 - Now we're watching a video of Rhythm Heaven, for the DS. Imagine Wario Ware combined with a rhythm game and you get the idea. Looks delightfully silly.

Rhythm Heaven became an "evergreen" title in Japan. Will it have the same success in the US? We shall see when it comes out in eleven days. Woo, and we all get a copy! Sweeeeeeet.

47% of all new DS players last year were female. Guess those Carrie Underwood commercials did their job, huh?

9:42 - "There is no single formula for success on Wii." Iwata is emphasizing that, despite common opinion, third party developers do quite well on Wii.

9:43 - The global install base for the Wii Balance Board is only slightly smaller than that for the PS3. Poor Sony.

9:44 - Now we get a demo of a new WiiWare game, Rock n Roll Climber. Using the Balance Board, the Nunchuk and Wiimote,the developer controls someone scaling a rock climbing wall. Shifting weight and moving his hands corresponds well to the movement of the climber. So that's the climbing bit. When you make it to the top, you get a brief little rock jam. Um...okayyyyyyy.

9:45 - WiiWare is a place where your big idea can succeed without big investment. Most WiiWare title are third party.

9:47 - New storage solution coming! "Your games will no longer be competing for space with the system memory." With Wii System Menu 4.0, a single SD card can now hold up to 240 individual titles. "How can he store all this content on a standard SD card?" The Wii can now handle high-capacity SD cards.

(Ok, I know it's not as exciting as a new Zelda game, but we've needed this kind of improved storage for the Wii for quite some time. You download just a few Virtual Console titles and your Wii is full.)

10:05 - After a brief demo of some new DSi games, we're getting one last video of an upcoming DSi title. A train comes into view. A lock of blonde hair is just visible in the engine. Is that...is that...IT IS! It's LINK! The Legend of Zelda Spirit Tracks. It will be available later this year.