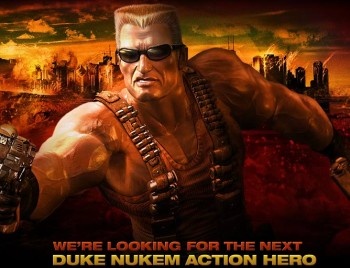 Apogee Software is looking for a man, and not just any man but a manly man with the stones to become the first real-life Duke Nukem.

Apogee and Deep Silver are holding a cross-country search for the ultimate alpha male, who will be paid to travel around the world as the "face of the franchise." Live auditions will be held in New York, Dallas and Los Angeles, and fans unable to attend can also submit a video audition on DVD, tape or digitally in Quicktime format.

"Fans can do whatever they want to demonstrate why they should be the next Duke Nukem," the contest website says. Entries will be narrowed down by a panel of "Duke experts," and those selected as possible candidates will be "judged accordingly," with the winning contestant announced at the 2009 E3 in June.

Eidos has employed several models to represent their famous videogame heroine Lara Croft over the years but as far as I know this is the first time anyone has launched a nation-wide search for a gravelly-voiced meathead to fill the role of a male videogame character. And while no offense is intended to anyone, particularly whoever ends up winning this contest, but what are the odds of finding a Duke Nukem-type character among Duke Nukem fans anyway?

More to the point: Is this a sign of action on the Duke Nukem front? After well over a decade of alleged development, is it possible - dare we say it? - that Duke Nukem Forever might actually be on the way? Deep Silver's involvement means the talent search is probably just in support of the Duke Nukem Trilogy, but hey, we can dream.

Specifics about the live auditions and where to send recorded entries will be revealed on April 6, giving all the world's Duke hopefuls plenty of time to practice their baddest-sounding "Suck it down" and "Come get some" impressions. Full details about the search for the real Duke Nukem can be found at dukeisback.com.