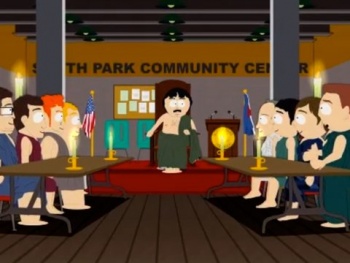 The moral velociraptor of our times lets fly again with the story of Jesus, the Credit Crunch and GTA Chinatown Wars. Classy.

In "Margaritaville", aired last night, the episode follows the rough period from the Sermon on the Mount to The Last Supper with a few "clever" alterations - For instance, replacing God with the Economy, talking about how "The Economy has failed us" and "The Jewish Kid must be the Son of the Economy"

The Last Supper takes place over pizza, of course, with Eric Cartman saying that anyone who betrays the new Son of the Economy "is a dick." No surprises who is the eventual Judas here - instead of the usual thirty pieces of silver, Cartman has already made a deal with the council for a Nintendo DS and GTA: Chinatown Wars. Cartman states his need to be popular, and it's not as if he's not sold out his friends before.

While the show almost manages to get past PacMan Fever (Writing about games with very inaccurate information), it slips up once when Cartman refers to Chinatown Wars as GTA 4. Then again, these are the guys that brought us the "documentary" Make Love Not Warcraft, so I think they can be forgiven that one.

The episode can be viewed over at Comedy Central. Sadly, non-US dwellers are faced with the standard [Denied] page.

Perhaps it's for the best, because the final punchline - which I won't mention here - will largely only make sense to the American audience.

Escape to the Movies: Son of God MovieBob 129 Comments
Comments on