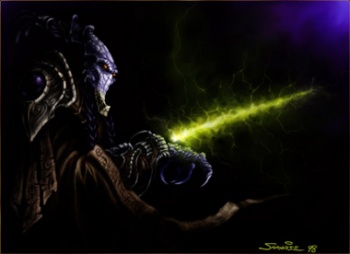 Several StarCraft fansites are running a countdown to ... well, we don't actually know. Might the long-awaited SC2 beta be upon us?

The road to the StarCraft II beta feels longer than it actually is. Anticipation is at an all-time high, and naturally there have been some who try to take advantage of it. But there have been some very interesting developments lately ... so one might wonder if we're nearing the end of the road.

First, it was the launch of the new Battle.net, that integrated WoW accounts into a general Blizzard Account. Hoaxes aside, StarCraft fansite StarCraftWire shed some light on a new "Beta Opt-In" feature that went alongside Battle.net 2.0. Then, there was the update to the Beta Sign-Up page on the official WoW site - BlizzCon attendees can now input the code on their loot card to sign up for the upcoming test.

Most perplexing, however, is the countdown that has suddenly appeared on a number of StarCraft fansites. All three of them are counting down to the exact same thing - as of writing, there are 5 days, 9 hours, 2 minutes and 20 seconds until ... whatever it is. When I checked with StarCraft 2 Forum admin Jonathan Tietz, he told me that he "wasn't at liberty to say" what the countdown was for - or perhaps he didn't know himself. Mysterious indeed.

Of course, the countdown will hit zero as soon at the clock ticks 1:00 AM (Eastern Time) on Wednesday, April 1st. There are two reasons this date is significant - for one, it's April Fool's Day, and Blizzard sure does love their April Fools' jokes ... maybe too much.

On the other hand ... April 1st is also the anniversary of the release of the original StarCraft - eleven long years ago. So while Blizzard could very well be preparing to yank the Internet's collective chain, they could also be teasing the official start of the SC2 beta test.

Update - False alarm, folks. Unless Blizzard is deciding to be really, really sneaky, we'll be chalking this one up to an early April Fools' prank.