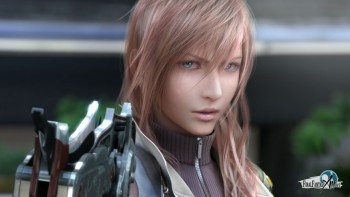 Combat in Square-Enix's Final Fantasy XIII will center around pseudo-real-time battles and chaining attacks. No word about super attacks with five-minute-long animations and pointless Christian symbolism.

While we still know little about FFXIII's plot or when it's coming out (if it ever does), Square-Enix has just taken the wraps off one of the most crucial aspects of the game: the battle system. From the sounds of the information revealed in a number of Japanese magazines, it seems like FFXIII's combat won't be nearly as adventurous as FFXII's somewhat controversial system, but will still make a number of drastic changes to the traditional formula.

Almost all of the FF games' battle systems feature some variation on the franchise's trademark turn-based "Active Time Battle" system where characters have to wait until a meter fills to act, and FFXIII is no different. Only this time around, there's a single meter for the entire party (as opposed to each character) that fills over time, and you don't have to wait until it's full to use it.

Instead, the meter is divided into separate units, and different actions cost different numbers of sections. After enough of the meter is filled to make one unit, you can use a regular attack or an item. If there are more units or the meter's completely full, you can spend them on multiple attacks or other actions. Fancier spells and the like require more units, naturally.

Meanwhile, as you chain consecutive attacks, another meter fills up in the top right of the screen. Successive chains do more damage, and when the meter's full, you can enter into a special "Break" mode where all enemies take more damage and can even be juggled in the air for maximum style.

Furthermore, battles don't take place on separate screen, but automatically begin whenever you come into contact with an enemy on the field.

No word on how summons will play a role, or what form Limit Breaks / Ultra Super Arts Plus or what have you will arrive in. I just hope you'll be able to skip through the mini-cutscenes that always play whenever you do one.