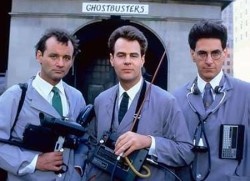 Harold Ramis - writer and co-star of Ghostbusters - reportedly "had no idea" what he was getting into when he signed on to reprise his role as Egon Spengler for the upcoming ghost-busting videogame.

I don't think anyone would disagree with the idea that working on a major Hollywood motion picture takes a lot of hard work. Nor do I think anyone would disagree that these days, games are becoming more and more like movies (gee, if only we had an issue devoted to this sort of thing this week...). Still, just because you're familiar with one medium doesn't mean it's simple to jump over to the other - just ask Harold Ramis.

Ramis, who is perhaps best known for his work as scriptwriter and co-star of the 1984 blockbuster Ghostbusters, agreed to reprise his role as paranormal researcher extraordinaire Egon Spengler for the upcoming video game that continues the story of the Ghostbusters where the second movie left off. Ramis told MTV that he hadn't been prepared for the amount of work that went into voicing a video game:

"It was a little weird. I had no idea because I'm not a gamer. The game scripts are like 250 pages. You need all these alternatives so it took forever. A lot of it is just yelling, 'Look out! Throw that trap, rookie!' Stuff like that."

Beyond providing his voice for Dr. Spengler - "Fortunately the voice still fits," Ramis joked, even if the old uniform did not - Ramis worked with fellow Ghostbusters star Dan Aykroyd as a consultant on the project. Whereas Aykroyd acted as a consultant for the game's overall story, Ramis said that he "helped [Aykroyd] change the dialogue." So, knowing that the original Ghostbusters scriptwriter had a hand in writing the game's script should put some minds at ease, no?

Ghostbusters is set for a release this June to mark the 25th anniversary of the original film.

Cosplay Galleries: The Dragoncon Parade Gave Us The Best Samus Ever RossaLincoln 8 Comments