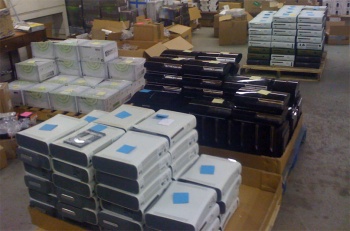 Kotaku was contacted by a reader who works in a refurbishing facility that bought some of Circuit City's stock of pre-owned Xbox 360, PlayStation 3, Wii, DS and PSP systems when the company went under. The terms of the deal specified that the systems would be in working order, "with maybe a few components missing." It may or may not come as a surprise depending on your own particular bias toward the company but Circuit City apparently failed to live up to its end of the bargain: 217 of 227 Xbox 360 and 167 of 205 PlayStation 3 consoles received in the deal were "non-functioning."

Bad enough in itself, perhaps, but things got even uglier when the center started repairing and testing the consoles. When the systems were taken online to check their connectivity, many of them suddenly started popping up with friend requests, chat requests and invitations to play games. Technicians found friends lists, photos, "sexy home videos" and more - including credit card details.

That Circuit City didn't wipe the systems after taking them in or before shipping them out to other dealers isn't particularly surprising in light of the company's circumstances at the time. The final few days of Circuit City were probably something like the fall of Saigon and employee diligence, not one of the company's strong points even at the best of times from what I understand, would have gone completely out the window. The level of indifference would have been positively astronomical.

But there's enough responsibility to go around here and while the Circuit City's indifference is understandable, that of the people who brought these units in without wiping them clean first isn't. Let this be a lesson: This is your information and ultimately it is up to you, dear reader, to ensure it doesn't end up floating around out there like a dead goldfish flushed out to the sea. It's no excuse for Circuit City's big-time ball-drop but blithely trusting your sensitive and valuable data in the hands of large, faceless corporations is just begging for trouble.