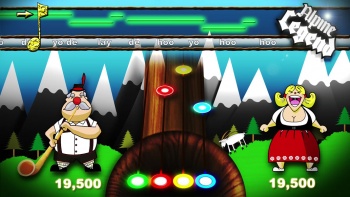 It's that time again - April Fools' Day! Yes, the one day where trying to search for legitimate news on the Internet is more futile than trying to make fanboys get along. Here are some of the more clever jokes we've found...

Ah, April Fools'. You know, normally it's pretty easy to find and post news for you all - at least, for 364 days out of the year (well, maybe not between Christmas and New Years'...). But for this one, vexing day ... we have to actually use judgment. Discretion. Pah! A Jedi craves not these things!

So yes. While we behind the scenes here at Chez Escape will be thinking twice before announcing "OMG GUYS SONY AND MICROSOFT TEAMING UP FOR NEXT GEN PLAYBOX 420," here are some of the jokes we've seen so far:

Dragon Quest IX Suddenly Released in Japan: If you're a Japanese gamer, there are few titles more significant or more hotly anticipated than a new installment in the Dragon Quest series. Since you probably also love your DS, a DS Dragon Quest is double the pleasure, double the fun. Which is why Akiba Blog's (fake) announcement of people lining up across the country for the release of Dragon Quest IX on the DS is so horribly cruel. I guarantee you that at least one Japanese gamer woke up, read the news, and panicked that he'd somehow missed the game's release.

Metal Gear Campbell: Oh, Hideo Kojima. You crazy, wonderful man. One might have guessed that after Metal Gear Solid 4, the man had successfully gotten the desire to see elderly - geriatric, even - men fighting bipedal robots out of his system.

Alpine Legend: Hey, you know that one game where you play the little plastic guitar and hit the little plastic drums and sing into ... okay, I guess you sing into a real microphone. No, not that game, the other one. Microsoft is getting in on the business with Alpine Legend, giving the music game a Swiss twist. Check out the promo trailer, or preorder your very own Mountain Goat peripheral while supplies last!

Nintendo's Wii Height: I'm not sure what to think about this one. I can almost see it actually being a real product - almost - and frankly, the implications of that are ... slightly disturbing.

World of Warcraft - Pimp My Mount: Your Swift Olive Raptor got you down? Your Cenarion Hippogryph looking kind of bland these days? Azeroth's resident "mount pimp" (geez, that sounds wrong) Zazzber and his assistant Janie Sue are here to pimp your mount out with all the tricks and goodies. Be the talk of Dalaran once again!

Hfire: Gaming Hoffified: My God. Xfire, what has The Hoff done to you?! The horror. The horror! (Say it with me now, everybody: Ooga chakka, hooga hooga ooga chakka...)

ThinkGeek's Interactive Portal Shirts (and more!): This shirt was a triumph. I'm making a post here - huge success. It's hard to overstate my satisfaction. ...Sure, the joke may be a bit worn thin by this point, but who wouldn't want a shirt that shows you exactly what the counterpart shirt-wearer is seeing at all times? Communists, that's who.

The Portal shirts aren't the only ThinkGeek novelty today. Why not look at Squeez Bacon, or buy an adorable little USB Pet Rock? I'd totally sleep inside a Tauntaun sleeping bag, and ... well, we here at The Escapist thoroughly endorse Unicorn Chaser.

Google Autopilot: Man, replying to every individual email you get manually is such a drag. Good thing Google's uber-technicians are here to make life simple! With Google Autopilot, you'll never have to worry about reading and replying to Uncle Jeff's holiday wishes ever again!

Raiho Plushie Shipment Hijacked: Atlus U.S.A. announced some very sobering news today - a shipment of valuable Raiho plushes intended for the Western market to promote the upcoming Devil Summoner 2 has been hijacked by pirates. No, the actual kind of pirates. You know, "Yarr, matey, walk the plank!" instead of "DOWNLOADIN WAREZ LOL!" The pirates have released video footage of the captured rare collectibles, but Atlus has emphatically gone on record saying that they do not negotiate with terrorists.

Save IE6!: Problems with IE8 might have sent some scrambling back to IE7, but some people aren't even satisfied with that. IE6 has been around since 2001, they argue. Why shouldn't it be the permanent standard, now and forever?

Super Smash Bros. X: Ever wanted to see Link cut off Mario's head? Now you can.

Kirk and Spock Confirmed Gay in New Star Trek: I think all that needs to be said is a quote from the article: "'Are you kidding?' Shatner told AfterElton.com. 'Who do you think has been writing all that slash fiction? Half of it was me, and the other half was Leonard [Nimoy].'"

Umbrella Corporation Requests Government Bailout: "It's about hope. It's about mom, baseball, and apple pie. It's about keeping the United States at the forefront of exciting fields such as pharmaceutically mind-controlled super soldiers."

Wii Fit's April Fools: Your Balance Board would never lie to you - or would it?!. Shamus was right!

Blizzard Reveals Diablo III's Archivist Class: Blizzard is known for putting effort into their April Fools' jokes, and the Archivist is no exception. Featuring massive radial dialogue trees and the incredibly powerful "Shush!" spell, I sure know I can't wait to play one!

StarCraft II's Terra-Tron: Who needs Siege Tanks, Goliaths, or even Thors when the Terrans can turn their entire base into a giant fighting robot?

World of Warcraft Dance Battle PvP System: Battlegrounds and Arenas are so 2007. Set up your Battered Booming Crate and get ready to throw down - you got served, Azeroth style!

Grand Theft Auto: Harbour City Leaked by IGN: Australia is infamous for its heavy-handed censorship towards violent games. But what happens when the next Grand Theft Auto game is set there? Alas, I doubt we'll be going stealing cars Down Under any time soon.

TF2's Sniper Learns "Jarate": Uh... well, I guess if you're going to be in the heat of battle, throwing a jar of your own urine at enemies is ... one way to drive them off. Ew.

Stay tuned for more - this post will be updated over the day as more jokes come in ... while you're waiting, though, why not try and score some hotly-anticipated tickets for Pony Jam '09?

(If you've stumbled across a particularly interesting April Fools' joke, send us a heads up at [email protected]!)