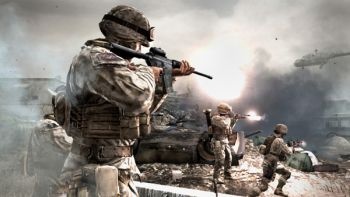 In a shocking development, Activision is hoping that the upcoming Call of Duty: Modern Warfare 2 will sell well. Or, to be more precise, that it will be the best-selling videogame of all time.

Whatever it is, it's the sequel to one of this generation's most popular and critically acclaimed games, and it will be hitting shelves during the 2009 holiday season. Naturally, publisher Activision is hoping that the game will sell well - a ludicrous concept, I know. Given CoD4's popularity, it's certainly not an unreasonable idea.

Apparently Activision is hoping that MW2 will sell really, really well. "We want to propel this year's title to be the biggest selling video game of all time," brand manager Simon Wells told MCV UK. "That may raise some eyebrows, but step back and look at the franchise's trajectory through preceding launches, and this objective starts to look viable."

Even if Modern Warfare 2 doesn't post Wii Fit-esque numbers or top all-time sales charts, Wells is confident that the game can still be the best-selling entertainment property of the year, including other media like films and television: "The reality for a franchise as large as Call of Duty is that we are competing directly with entertainment propositions outside of the video game space."