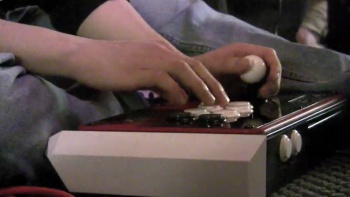 Does Street Fighter have its King of Kong? A feature-length documentary from the mind of one ambitious young filmmaker may just capture all the guts, glory and, of course, trash talk, that make the fighting games scene the madhouse that it is.

Though professional gaming leagues might be getting hit hard by the economic downturn, there's never been a better time to be a competitive Street Fighter player. The resurgence of the franchise in the form of Street Fighter IV doesn't mean just new blood in the tournament scene, but a new crowd of onlookers as well. So why not make a movie about it?

That's the idea behind I Got Next, a feature-length documentary single-handedly produced by Ian Cofino, a graphic design student at Purchase College who happens to also love Street Fighter. Cofino started the film as a senior project, but after traveling to tournaments up and down the East Coast and talking to some of the best Street Fighter players in the country, he knew that this had to be more than a 15-minute attempt at a good grade.

"The passion and dedication that the players in the community had allowed me to see the potential for something much greater than what I had originally intended," Cofino said.

The trailer gives the impression that he's captured that passion and dedication pretty nicely. You've got your West Coast / East Coast trash talk, your crazy amped up crowds and intense matches (including a closer look at the most ridiculous moment in recent SF history), sure. But there's also some surprisingly candid interview footage with some top players waxing poetic about what it is that makes beating up another dude in a videogame so joyful to them. "When you're following your passion, everything comes together," Ryan "Gootecks" Gutierrez opines in the trailer. "There's no reason any of this should work."

So far Cofino's got around 30 hours of footage that he'll be editing into two cuts: a shorter piece that'll come out in May, and a longer, feature-length film that he hopes to put out this winter, both for free online. The feature-length cut will be fairly different than the one coming out in a couple months, as it'll include footage shot at this summer's sure-to-be-monumental Evo worldwide championship tournament.

As for how a college kid up to his neck in loans can afford to shoot a feature-length movie in this economy? Well, Cofino tells us that "the short answer is that I'm not." Welp. Check out the trailer for I Got Next here, and if you're feeling generous, drop Cofino a donation. Kid's going to be eating Top Ramen for months to make this thing happen.