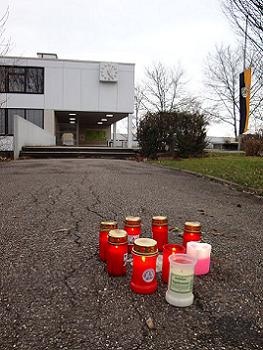 Last month, 17-year-old Tim Kretschmer killed fifteen people in the town of Winnenden, Germany, before turning the gun on himself. Predictably, the country has been seized by a moral panic, with German officials, parents, and legislators pointing at Kretschmer's affinity for violent games.

Bavarian Minister of the Interior Joachim Herrmann - a longtime opponent of violent games - may not be the first German politician to criticize videogames in the wake of the school shooting, but he has certainly taken it the furthest so far. On Tuesday, Herrmann put out an official press release to coincide with the first government-sponsored German Games Awards, held in Munich.

The statement contains the usual accusations that "such games are one of the causes for youth violence and also for school shootings, where images from killer games become reality",and that "more and more children are getting mired in this virtual world of violence," so that "they have no time left for school or job training, and are lost to our society."

However, this time, he's taking it a bit further. The last sentence states: "In regards to their harmful effects, [violent video games] are on the same level as child pornography and illegal drugs, the ban on which rightly is unquestioned."

A second German official, Thomas Jarzombek - Commissioner for the New Media - criticized Herrmann's remarks: "The comparison is completely inappropriate... anyone making such statements is unqualified to participate in any further debate [regarding the] protection of minors from harmful media."

Herr Jarzombek, of course, is completely right - whether you agree or disagree that carnage-filled games could potentially desensitize children to violence, making hysterical and over-the-top comments like Herrmann did doesn't help anyone. All it does is further incite mass hysteria and encourage people on both sides of the issue to dig down into firmly entrenched positions instead of ever engaging in reasonable, polite discourse.

Critical Miss: On Mules and Asses The Wooster 80 Comments
Comments on