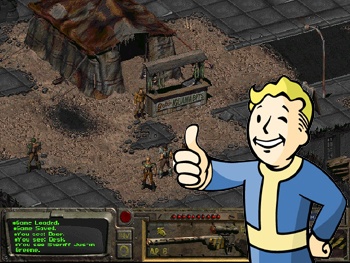 Interplay has signed a "binding letter of intent" with Masthead Studios to develop the MMOG codenamed Project: V13, the game everyone thinks is a massively multiplayer Fallout game.

Interplay and Masthead will collaborate, under Interplay's "direction and control," to complete the project, which has been in development since late November 2007. As part of the deal, the game will make use of tools and technology developed by Masthead for use in its Earthrise MMOG, which is currently slated for released in the second half of 2009.

"We are looking forward to turning the vision of our game designers into a compelling online gaming experience," said Interplay CEO Herve Caen. "The planning and design completed for Project: V13 thus far, combined with Masthead's resources, tools, and growing team of dedicated MMOG developers, will bring this unique game to reality."

"This arrangement is ideal because it leverages the technology our professionals have specifically built for advanced massively multiplayer online games into what we expect will be a groundbreaking Interplay gaming title," added Masthead President Atanas Atanasove, who said the deal with Interplay wouldn't affect the schedule of Masthead's own post-apocalyptic MMOG. "Earthrise's development and launch will continue as planned", he said.

Interplay hasn't yet made a formal announcement but the assumption that Project: V13 is a Fallout-based MMOG is widely held, for several reasons. The title itself appears to be a clear reference to Vault 13, the home of the original Vault Dweller, and there's also the hard-to-ignore fact that part of Interplay's deal to sell the Fallout rights to Bethesda back in 2007 included licensing the rights to a Fallout-based MMOG. And really, what else does Interplay have going for it?