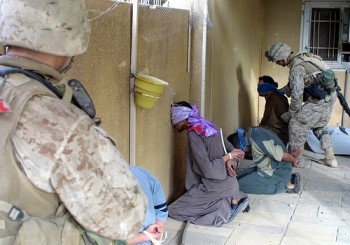 Konami has announced Six Days in Fallujah, a game based on the November 2004 battle between the U.S. military and insurgents in the Iraqi city that promises a more realistic insight into the nature of war than other videogames.

The idea, according to the Los Angeles Times, came from U.S. Marines who returned home from Iraq with videos, photos and diaries of the war in Iraq. Rather than turning their experiences into books or movies, a number of them decided to turn to a medium they felt more familiar with: videogames. They approached Atomic Games, a studio known primarily for its work in wargames like the Close Combat series. "The soldiers wanted to tell their stories through a game because that's what they grew up playing," said Konami Senior Brand Manager John Choon.

The game will be a "traditional third-person tactical shooter" but Atomic describes the game as survival-horror because of the way it will realistically model the lethal and frightening tactics of insurgents in the Fallujah operation. Players will step into a four-man Marine fire team charged with clearing the city and while realistic environments and weapons will feature strongly, Atomic says Six Days in Fallujah will stand out from the crowd by offering "insight" into the reality of modern warfare.

The game will feature over a dozen real-life Marines in documentary-style interviews spread throughout the game; those same Marines will also appear in the game itself, performing tasks similar to those they carried out in the actual war. "What interested us were the soldiers' stories," said Anthony Crouts, vice president of marketing at Konami. "Some of these soldiers came right out of high school. They went from boys to men in the span of two weeks."

Players will be confronted with many of the same tough decisions soldiers in the war had to make, quickly and under fire, and in both real life and the game those choices and their consequences aren't always clear. "Our opportunity for giving people insight goes up dramatically when we can present people with the dilemmas and the choices that faced these soldiers," Tamte said. "It's a chance to really give them a better understanding and empathy."

Six Days in Fallujah is currently in development for the PC, Xbox 360 and PlayStation 3, and is scheduled for release in 2010.