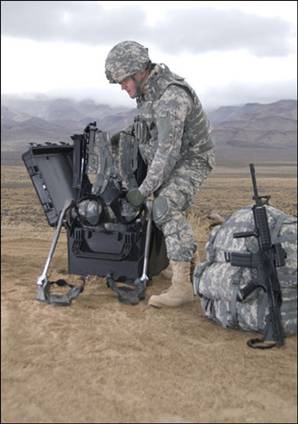 The new Lockheed Martin developed HULC (Human Universal Load Carrier) exoskeleton can increase human strength enough to let a soldier carry a 200-pound load while running at 10 mph, but unlike other bulky suits this one not only has an internal power supply (so no bulky cables) but only takes 30 seconds to remove.

Four lithium ion batteries power the suit, nestled into the small of the wearer's back, and that alone can keep the suit charged for 48 hours.

While wearing the HULC, you can still walk, run, kneel, crawl or jump as the computer's artificial intelligence moves the hydraulic system to amplify and enhance that movement.

Professor Aaron Dollar at Yale University explains that one of the hardest things to do in science is to improve on a evolutionary design.

"Walking is one of the things that the human body is most efficient at," said Dollar. "Anytime something is really good, like human walking, it is hard to improve it."

Gallery of the Day: Don't Miss The Call of Duty Reveal From GamesCom DrStrangelove 5 Comments