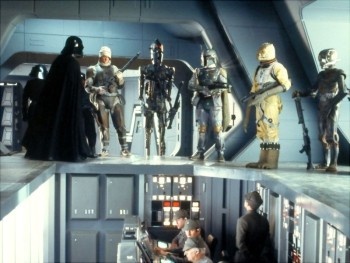 In the latest Star Wars: The Old Republic developer's blog, lead writer Daniel Erickson says there's no doubt about it: Bounty Hunters are bad to the bone.

Star Wars, at its core, is about the eternal conflict between good and evil, a back-and-forth battle between the Light Side and the Dark Side of the Force which inevitably draws in everyone it touches. It's impossible to remain neutral; not just Jedi and Sith but soldiers, civilians, merchants and mercenaries all end up choosing a side. For the Bounty Hunter class, that side won't be with one with rainbows and ponies.

Not that Bounty Hunters will necessarily be evil, just that the nature of their business naturally draws them toward those who are. "When Vader felt it necessary to specifically look at Boba Fett when he mentioned he didn't want anyone disintegrated, we understood this was a man with a reputation," Erickson noted. "When Boba Fett objected to Han Solo being frozen on the grounds that the Bounty Hunter needed Solo alive, Vader didn't intimidate Fett - as he did poor Lando - or choke him senseless. He listened and reassured him in a businesslike manner. He was talking to a professional whose work he respected."

BioWare considered the idea of a Republic Bounty Hunter class but decided it was "far less iconic" than the Imperial-aligned hunters and that devoting resources to developing it would take away from other, more compelling Republic character classes. Therefore, because no class will exist in both factions (at least at first), Bounty Hunters find themselves a Dark Side faction.

And although Mandalorians may be central to the Bounty Hunter mythos in the Star Wars Expanded Universe, they won't figure nearly as prominently in The Old Republic because, as it did with Knights of the Old Republic, BioWare wants to ensure that casual fans of the franchise don't feel left behind because they don't know what Morgukai are. "The Mandalorians have a huge Expanded Universe following, were a key part of KOTOR's story and history and are near and dear to my own heart - they do not, however, define what it means to be a Bounty Hunter in Star Wars and are alien to fans who only know the movies," Erickson said. "Look at that first lineup of Bounty Hunters [in The Empire Strikes Back], how many are Mandalorians? Now would you even know that much if you'd never read any back story?"

"What defines the Star Wars Bounty Hunter? Well, they work for the bad guys, but they're not necessarily bad guys themselves," he continued. "You get the distinct feeling they're doing a job... Whatever their story, they specialize in the hunt, the small scale assault, the personal touch. You don't call the Bounty Hunter when you need to take out an army; you call the Bounty Hunter when there is a very particular person whose death or capture could mean the difference between large scale victory and defeat."