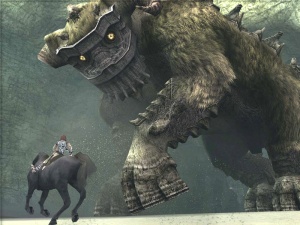 Regardless of whether or not film adaptations of videogames ever turn out good, some seem like obvious choices and some don't. Gears of War, sure. Saints Row? Why not, especially if 50 Cent is doing it. Shadow of the Colossus? No, absolutely not. Nevertheless, producer Kevin Mishner over at Sony Pictures is determined to turn Team ICO's minimalistic tale of love, loss and killing gigantic creatures into a big screen bonanza.

Attached to pen the screenplay is Justin Marks, who worked on Street Fighter: The Legend of Chun-Li as well as the upcoming 20,000 Leagues Under the Sea remake currently underway at Disney.

No offense to Marks or his work, but anyone who's played Shadow of the Colossus knows it'll take a lot to turn it into a Hollywood-style narrative. Because while Shadow of the Colossus has one of the most powerful stories I've yet experienced in a videogame, the narrative isn't exactly flush with action. Most of what happens occurs before the game even really begins and then at the very end. Everything else in between is just killing colossi and being sad while riding around on your horse, by yourself. On top of that, the story has a far from fairy tale conclusion.

So don't be surprised to hear that they're planning on making some changes to the plot. According to The Cut Scene's Ben Fritz, who's an acquaintance of Marks, the movie might involve bringing minor characters from the game (like the tribal leader trying to stop the main character) into bigger roles, and will be going for what Fritz calls a "Lord of the Rings-style fantasy tentpole."

I just hope they get a really good horse to play Agro, because that thing is going to be seriously overworked.

Critical Miss: They Brought Him to the Castle to Die... The Wooster 67 Comments

Featured Articles: For Want Of A Horse, The Game Was Lost Rachel Verkade 52 Comments
Comments on