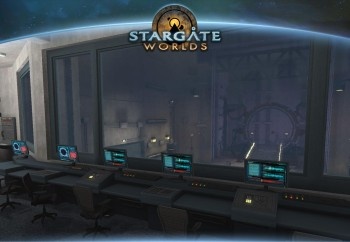 Contrary to what Stargate executive producer Brad Wright has or hasn't heard, Stargate Worlds is still very much alive and kicking.

"Our official response is that the lights here are still on and the development team is working hard every day to get this game built," Kevin Balentine, senior marketing manager for the game, said. "Team members are in the office seven days a week to deliver Stargate Worlds."

The Worlds team had not updated Wright on the progress of the game or how the economic situation had impacted the project recently, leading Wright to be "not fully aware of the continuing progress" on the game.

Wright may have rightfully assumed that the project was dead in the water, because, as Balantine admits, it has been "significantly impacted by the greatest worldwide economic downturn in decades." Nevertheless, according to Balantine, the game has enough money behind it to keep development going and has more money coming down the line.

"We are currently negotiating several deals that will cover our financial responsibilities and fund the remainder of development," Balantine said. "Until then, we'll keep building Stargate Worlds, because right now, that's the only thing that matters to us."

Escapist Podcast: 163: What Could Still Be Made Into A Game? The Escapist Staff 3 Comments