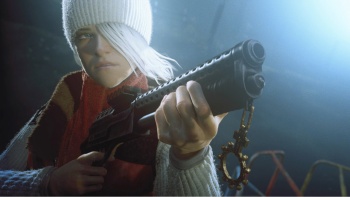 Designed by Ragnar Tornquist of Dreamfall and The Longest Journey fame, Funcom's new PC/360 MMOG, The Secret World, sounds like one of the least conventional MMOGs in some time.

"The Secret World begins where other MMOs end," Tornquist told Eurogamer in a lengthy interview. "There's no grind to get to a preconceived place." Plenty of MMOGs have made the lofty claim of doing away with the grind-heavy nature that seems intrinsic to the genre, but The Secret World is taking that pursuit to its most drastic end: it doesn't have experience levels or classes.

Combat, too, will take an unconventional approach with an "action-adventure" feel that's "fast and reactive." Same goes for character building - since there are no classes, customizing your character is completely up to your discretion. "If you want to be a character that has some magic power and ranged combat, you can use a shotgun and a voodoo doll and you can kick some serious ass using just your fists and your feet; you can do that," Tornquist said. Your abilities, in turn, will influence which content you can solo and which you'll need a group to beat.

Of course, the big pull for anyone who's ever played an MMOG is loot. In The Secret World, you can customize your appearance however you like, which means there's no armor to collect. So, The Secret World has no loot in the sense of pining over armor sets and hoping for gear to drop. Loot, as it were, exists in the form of weapons and special abilities: "[It] will definitely be the weapons and the powers you have, the cool special effects that you have, there will be ways to really see and differentiate - yeah, that guy's been playing this game a long time, and you can tell."

Outside of the actual mechanics, The Secret World also deviates from the fantasy setting of most MMOGs by taking place in a contemporary, real life world. Instead of visiting medieval cities and barren wastelands, you'll be going to places like London, Soeul, and uh, New England (the real Boston is bad enough, why do we need a virtual one). It's not just straight realism, though - details are scarce, but the game looks to mix in occult and mythology, with Vertigo comics, Neil Gaiman and Buffy the Vampire Slayer as reference points.

"We are building a game that mixes modern day Earth with terrifying monsters, dark and occult magic, cool weapons and awesome powers - and it's unlike anything you have ever seen before in an MMO," Tornquist said.

Sounds like Tornquist and Funcom are going to be trying some pretty ballsy stuff, a gamble in the sometimes conservative world of MMOGs where World of Warcraft is the primary template for success. Here's hoping they pull it off.

Something for the Ladies Shamus Young 74 Comments