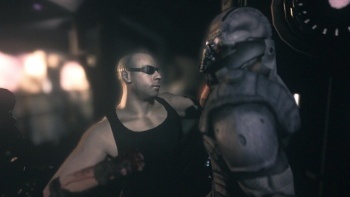 Word is out that the PC version of The Chronicles of Riddick: Assault on Dark Athena is packing DRM with an irrevocable limit of three installations, leading to predictable outbursts of gamer rage and one-star review scores on Amazon.

Users on the Atari forums claim that DRM included with Atari's new Riddick title limits the game to three installations and that once those are used up, the game cannot be re-installed. The information apparently comes from the May 2009 issue of PC Gamer, which gave the game a respectable score of 80 but added that it includes an online authentication scheme with no way to revoke installations.

Gamers are reacting badly to the news, of course, threatening to forgo the game entirely in order to protest Atari's use of harsh copy protection schemes which even EA appears to have abandoned. The Amazon bombing has also begun; currently, Assault on Dark Athena has a one-star score at Amazon.com, with DRM-driven negative reviews coming in regularly.

There's only one potential problem: Nobody seems able to confirm whether or not the game actually has an non-revocable installation limit. In fact, German gaming sites like GameStar (Google translated) claim that while Assault on Dark Athena does feature "install tokens" to limit the game to installations on three different PCs, these tokens are automatically revoked when the game is uninstalled. And if a user does manage to burn up all three tokens and wants to reinstall the game again, the site says Atari will provide replacements via a toll-free help line.

The status of the DRM may be uncertain but one thing isn't: Assault on Dark Athena is being punished online and sales of the PC version will almost certainly suffer as a result. It's unfortunate that gamers are willing to excoriate new games at even the slightest hint of obtrusive DRM, but it's not terribly surprising.

We've contacted Atari to shed some light on the matter and will update accordingly. In the meantime, if anyone has purchased the PC version of The Chroniles of Riddick: Assault on Dark Athena and feels like forwarding a copy of the EULA, I'd love to give it a look.

UPDATE: Atari has issued the following statement in response to the DRM controversy:

"The protection on the PC version of The Chronicles of Riddick: Assault on Dark Athena is an activation system with online authentication required the first time you install the game on a machine. The activation code lets you install the game on up to 3 machines, with an unlimited number of installs on each assuming that you don't change any major hardware in your PC or re-install your operating system."

"If you reach the maximum number of installations you can contact the Atari hotline and if it's a legitimate request you can get a new activation code. We implement this protection in an effort to avoid early piracy."