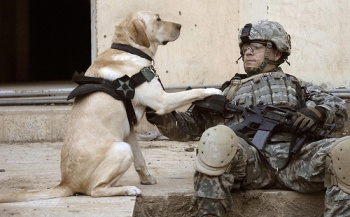 The announcement of Six Days in Fallujah resulted in outrage and anger from various quarters but support for the game is being expressed by gamers with an added layer of credibility - veterans of the war in Iraq.

Within 24 hours of the game's announcement, anti-war groups, parents of soldiers killed in the war and veterans of the original invasion of Iraq expressed strong disapproval of Six Days in Fallujah, concerned that by turning it into a game Konami will either trivialize the battle and the sacrifices made by soldiers who fought it or glorify the indiscriminate killing of civilians and incite Muslim fanatics to seek revenge. Some have even called for it to be banned, despite the fact that virtually nothing is known about how the game will actually present the subject matter.

But at least some soldiers feel very differently about the game. "As a combat veteran and as a gamer, I have no problem whatsoever with the game," Sgt. Casey J. McGeorge, who served three tours in Iraq, told G4. "As long as it's made as realistically as possibly, I believe that this could be a good thing for both combat veterans and for the war in general."

"Let it be made, and hopefully it will bolster support for military veterans by giving civilians insight into what this war was actually like for them," added Sgt. Kevin Smith. "You can't just lob a frag down the street or launch an RPG at a couple of guys if you have to reload. There are restrictions on what types of weapons you can use and when. Depending on what the Rules of Engagement were for the Marines in Fallujah, and if Atomic Games has consequences for violating them, I think some gamers might find it a little frustrating."

"Realism," of course, will be one of the biggest hurdles facing Konami and Atomic Games as they develop Six Days in Fallujah. Too little and the game will end up doing precisely what critics are claiming by trivializing the soldiers' experiences; too much and nobody will want to play the thing because let's face it, games are meant to be fun and war most certainly isn't. But these soldiers are hopeful that there will be at least enough reality to give other gamers an honest look at what they went through in the war, and for that they're willing to give Six Days a chance.

"I really hope that this title receives positive press and encourages more empathy towards veterans after gamers have 'experienced' what they have gone through," Smith said, before revealing his true gamer colors by adding, "On a side note, I really hope this game includes co-op!"

And for critics who refuse to be swayed, Gunnery Sergeant John Mundy offered these remarkably incisive words of common sense: "If someone doesn't agree with the game, they can spend their money elsewhere," he said.