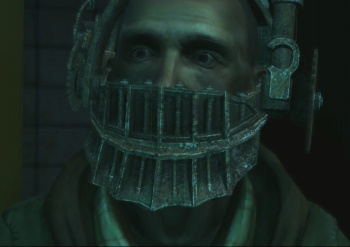 Saw's getting the game adaptation treatment by the house that brought us Silent Hill, but does the game live up to its horror game peers or the movies themselves?

It's called the Reverse Bear Trap. From the name you can imagine the general idea, but maybe not how it works exactly. That's simple, though: it goes in your mouth, a massive steel machine with two parts clamped to your upper and lower jaw. There's a beeping red light and a timer, and if you don't figure out how to get out, well, you know why it's called the reverse bear trap? Bear traps close shut - this bad boy pops open.

"Open wide," I said to myself as I failed to figure out how to get out of the trap for the fifth time in the night. This is how Saw, Konami's game adaptation of the ridiculously popular horror movie franchise, begins. And as much as I loved hearing protagonist Detective David Tapp get his jaw ripped open off-screen, I wanted to get to the rest of the demo.

Because while Saw the movies are all about the gruesome traps that the murderer Jigsaw comes up with to make his victims really think about how they're living their lives, Saw the game is about a little bit more. It's not an hours-long succession of trap-escape minigames, but something of a third-person survival-horror game along the lines of fellow Konami scare-fest Silent Hill or Sega and Monolith's Condemned.

Saw, which is set between the first two films, takes place in an asylum controlled by the psychotic Jigsaw. Tapp will explore the asylum chasing down Jigsaw, and along the way encounter other victims of that psycho's murderous imagination: people who've suffered at his hands and gone a little batty, who want to kill you either because you may hold the key to their salvation, or just because they're all nuts.

Though we didn't get a look at any combat, Konami says that it's of the "realistic," Silent Hill variety. You're not going to be "holding two AK-47s" in Saw, they told me. Instead, you'll be solving puzzles and doing minigames that are alternately hackneyed (move the electrical breakers to restore power to a fence!) or horribly gross in true Saw fashion (stick your hand into a toilet full of syringes to get a key).

Not that there aren't plenty of traps casually placed in all corners. At one point, I was strolling through a door rigged with a shotgun set to fire when I passed through - thankfully reflexes were all that was necessary to get past this by finishing an easy quick-time event.

Not so with the Reverse Bear Trap. Yes, I did get past it. Here was the trick: the game displays an analog stick icon while Tapp's struggling to get out, which I assumed meant all I had to do was rotate the stick. What I didn't notice was that the flashing red light on the backside of the thing was supposed to be a visual parallel to the Circle button, and when it blinked, I had to press Circle. Diabolical and clever, just like Jigsaw would have it, but how was I supposed to know that?

Saw does seem true to the spirit of its source material, but how it'll make the transition from the structure of the films to one of a game remains to be seen. Fans of the movies should definitely keep an eye on it, though, as it promises to flesh out the Saw mythos by explaining Jigsaw's origin and telling what happened to the characters of the first movie after its ending.

Look for Saw this Halloween on PC, PS3 and 360, doubtless along with Saw 15, or whatever sequel they're on at this point.

Jigsaw - I Saw Saw. Should You See Saw? Marter 12 Comments